How do you know when someone is passionate about their work? 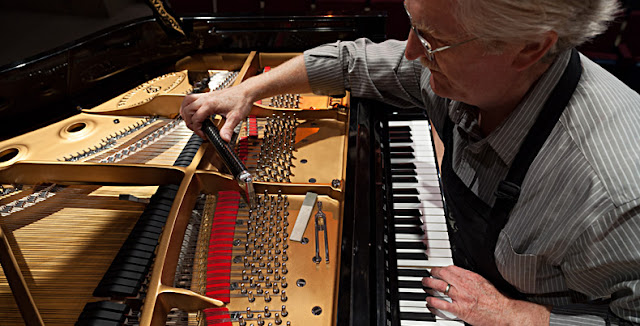 Yesterday I went to one of my job sites that one of my companies was servicing. It was a client of which I had known prior to becoming my client, I was his client.

Not to get confused. I have sourced him out to tune my piano. He happens to not only be a piano tuner but also buys, fixes and sells pianos as well. Will call him Pavel for the sake of this post. The reason why I do not give out the real names of people on my posts is because I like to respect their privacy.

Pavel also plays in a jazz band, but he does not play the piano. He plays the drums. On his spare time, he goes to concerts and listens to classical and modern jazz music. He understands the acoustics, which stadiums and music halls play well. The vibration of the sound coming off the instruments and bouncing off the walls.

He is in his late 50's. A man so well versed in what he does. I would consider him very successful. He has a daughter, wife, beautiful house in a prestige area, multiple cars and is thinking about buying another property to build two more houses.

He comes from the Soviet Union, he still has an accent, but has lived in Canada for well over 20 years. Roughly the same timeline as my self, we share a similar up bringing.

From the time I got to spend with him while he was tuning my piano and the tea that we shared during my visit to his home while Aladdin Homecare, my company, was doing a service for him, I understood what passion really meant for Pavel.

Pavel if asked would say he is passionate about what he does, but I didn't need to ask him. His stories spoke volumes, his tour around the house and his excitement sharing his insight about the pianos he had was astounding.

This man sleeps, thinks, and talks pianos unlike anyone I have ever met before.

I am not here to say that I have met many musicians, but I know a handful and I have never heard anyone be so strategic and so calculated about musical instruments. It almost seemed as if the money wasn't his primary motivator.

Business matters to me, my curiosity sparked the interest of needing to know how he was doing it. We already know the why, his love for music. My questions went as followed,

What was he making on the piano purchases? Could he make more doing it a differently, outsourcing perhaps? What was his strengths, and how could he capitalize on them? How was he getting his clients? Who was the primary audience? How was he going to deal with growth?

He had all the answers to my questions.

I walked away with more knowledge than I came into his house with that afternoon.

Everyday you need to ask yourself, "Have I learned something today? How can this help me further in my journey? If someone listened to what I have learned would they understand it, and would they be able to apply it?"

The last part is so important, "APPLY IT".

I am not going to preach about how knowledge is no good unless you are able to put it into actions, even though I just did now, and that I have done so in the past if you have followed my posts.

You will hear me repeat things often. This is not to sound like a broken record, but because the content is so valuable it is worth repeating.

Pavel has honed in on his skills for decades. According to the 10,000 hour rule, he is now a master at his craft. His joyfulness of when he talks about pianos is so obvious like salt in ocean water.

He has been doing business on his on terms, by himself.

The one flaw I want to mention here is that Pavel has built a profitable business of which doesn't seem like a business to him since this is his life's work, the flaw is that only he is able to do it. He has built a business that is solely relying on himself.

With Pavel being sick, injured or on vacation, the business stops.

Thank you for reading this post. I will explain further about the system versus the job, and residual income another time. To be continued....

You can find me on Karasingroup.com